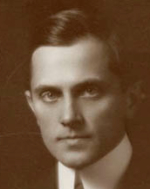 Marshall Bartholomew was born in Belleville, Illinois on March 3, 1885. He was educated at the Sheffield Scientific School of Yale University (B. Phil., 1907), the University of Pennsylvania (Mus. B., 1909) and the Hochschule für Musik in Berlin. Bartholomew directed the Yale Glee Club from 1921 to 1953. When he was appointed, the Glee Club was a rather casual group specializing in light music; he raised performance standards, took on more ambitious repertoire, and toured widely. By the time of his retirement, the Yale Glee Club was internationally renowned.

During the first World War, Bartholomew organized singing activities among prisoners of war, and later headed the Music Bureau of the National War Work Council. He founded the International Student Musical Council in 1931 to promote and encourage international good will through singing. In World War II, he served on the Joint Army and Navy Committee on Welfare and Recreation. In addition, he composed or arranged numerous works for schools and singing groups, and he collected research materials for a book on singing. He received an honorary degree from Yale in 1953, and the Yale Medal in 1955. His last major project was research into the history of music at Yale in preparation for a book on that subject. Marshall Bartholomew died on April 16, 1978 in Guilford, Connecticut.