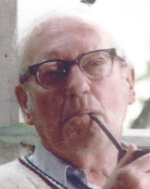 John Low Baldwin, who conducted the University Glee Club of New York City, an exuberant and exclusive throwback to the era when groups like the Whiffenpoofs — meaning men and only men — ruled the risers, died Dec. 31 of lung cancer at a Morristown, N.J., hospital. He was 76.

Mr. Baldwin, an accomplished organist who also led other singing groups, brought a highly personalized blend of playfulness and perfectionism to his direction of the 130-member glee club, which was founded in 1894.

At the group’s concerts, which are held in rented halls and are not open to the general public, the audiences are expected to wear black tie; the glee club wears white tie and tails. The repertory includes such diverse pieces as college drinking songs, Latin hymns, African lullabies and drinking songs from operas.

Mr. Baldwin, who was the club’s fourth and longest-serving conductor, at 39 years, did not shrink from flamboyance. In an article in The New York Times in 1987, Holcomb B. Noble, a reporter for The Times and a club member, described a typical rehearsal scene. Mr. Baldwin, he wrote, ”will march around the podium, grab himself by the seat of the pants, moan, warble and shout: ‘O-O-O-O-oh, am I hearing a bunch of tired old men — or singers?’ ”

John Low Baldwin was born and raised in Parsippany, N.J. A churchgoer impressed with his lucid voice at 9 recommended him for a place in the boy soprano choir of the Cathedral of St. John the Divine. He startled the music director of the Episcopal choir by auditioning with the Presbyterian gospel hymn ”The Old Rugged Cross.”

He passed the audition, and by the time he was 16, he was both the cathedral’s associate organist and master of choristers. That year, he graduated from high school and passed the examination of the American Guild of Organists; at the time, he was the youngest person to pass the test.

He joined the Army, where he was assigned to the Rainbow Division of the Eighth Army in World War II. Some music-loving colonels put him in charge of 200 singers picked from a regiment of 10,000. Just as he was about to start a round of war bond rallies, he was sent overseas and found himself at the front lines as an assistant to a Mormon chaplain. He fought in the Battle of the Bulge and helped liberate Dachau.

By the end of the war, Mr. Low was a sergeant directing a glee club of 60 men in Vienna. They raised money to restore damaged cathedrals, while living in Salzburg Castle with servants at their disposal.

Mr. Baldwin’s first civilian post was as organist at Grace Church in Utica, N.Y. In 1947, he joined the faculty of nearby Hamilton College, though he had not been to college. In 18 years at Hamilton, he served as chairman of the music department and founded the Root Art Center.

He became conductor of the University Glee Club in 1961 while still at Hamilton. Although he held one of just two paying positions at the club, he insisted on being a dues-paying member and a leading contributor to the club’s endowment as well. In 1965, he became a professor of music at Fairleigh Dickinson University in Madison, N.J. In 1969, he took the post of organist and choir director of the Church of St. John on the Mountain in Bernardsville, N.J.

”He drew as much perfection out of us as he possibly, possibly could,” said Susan M. Ely of Bernardsville.

In early December, Mr. Baldwin was vigorously preparing the glee club at its weekly Thursday rehearsal for its January concert, one of the club’s two main annual events. A club member, Paul Loewenwarter, recalled how Mr. Baldwin’s back was typically ramrod straight and how energy seemed to burst forth from his barrel chest.

Mr. Baldwin was equally at home with mixed and male choruses. ”He would let a donkey sing, if he thought the donkey would make the right noise,” Ms. Ely said.

Mr. Baldwin lived in a 200-year-old stone house in the Willow Wood Arboretum in Far Hills, N.J. He was not married, and his three brothers died before him.

He died minutes after being told that the year 2000 had dawned in Paris, where for many summers he served as an organist at the American Cathedral of the Holy Trinity. In his last hours, he was asked what music he wanted to hear.

”Whatever you play, just play it loud,” Mr. Baldwin said.