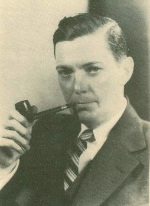 Channing Lefebvre is best remembered among organists as being the organist and choirmaster of Trinity Wall Street from 1922-1941 and Warden (the position was changed to President in 1949) of the American Guild of Organists from 1939-41.

But his name was held in even wider renown as director of the University Glee Club of New York from 1927-1961, and as music master and school organist of St. Paul’s School in Concord, New Hampshire, from 1941-61.

Following his positions in New York and Concord, he lived in Manila, Philippines, for six years and was the organist of the Episcopal Church of St. Mary and St. John in Quezon City. In April 1967 he had just arrived in New York for a visit on his way to retirement in Digby, Nova Scotia, and attended a rehearsal of the University Glee Club for an upcoming concert in Philharmonic Hall, when he died the next day of chronic cardiovascular complications while staying at the Columbia Club.

He was a native of Richmond, Va. where his musical gifts were nurtured at an early age, particularly by his great uncle, the Rt. Rev. Channing Moore Williams, the Bishop of Japan, who was visiting his home church of St. Paul’s in that city. From that time on Bp. Williams supported his young namesake as he attended first St. Paul’s Choir School in Baltimore, and then Peabody Conservatory.

After early positions at St. Stephen’s Church in Washington, and assistant organist of at the Cathedral Church of St. John the Divine, Lefebvre served during World War I in the Navy Reserve. Following that he served at St. Luke’s in Montclair, New Jersey, before being called to Trinity.

Before his long tenure with the University Glee Club, he founded the Down Town Glee Club, and served as director of the Musical Art Society of Orange, N. J., and of the Golden Hill Chorus, a group of women singers who worked in the financial district of Manhattan.

His obituary in The New York Times, dated April 22, 1967, states that he was 72 at the time of his death. It also says that “he was an inveterate pipe-smoker” and that “he used to conduct his chorus rehearsals without outbursts of temperament.”

He received an honorary doctorate from Columbia University sometime in the late 1930s at which time President Nicholas Murray Butler’s citation read in part that he was “born to love of music and early seeking a musical career; successively choirboy, organist, and now choirmaster and organist at Trinity, that ancient foundation to which this university is bound by ties that go back to its very birth.”

From the website of the New York Chapter of the American Guild of Organists, http://www.nycago.org/Newsletter/1302newsletter.html

Channing Lefebvre, former organist and choirmaster of Trinity Episcopal Church, Broadway and Wall Street, and former president of the American Guild of Organists, died in his sleep early yesterday at the Columbia Club, 4 West 43d Street. His age was 72.

The cause was given as an arteriosclerotic and cardiovascular condition complicated by Parkinson’s disease.

Mr. Lefebvre had arrived in the city on Wednesday from Manila, where he had lived for the last six years and where he functioned as organist of the Episcopal Church of St. Mary and St. John in Quezon City.

He had seen many of his old friends Thursday night at The Lambs, at a rehearsal of the University Glee Club, which he had conducted for 34 years. He had planned to attend the glee club’s concert last night at Philharmonic Hall. 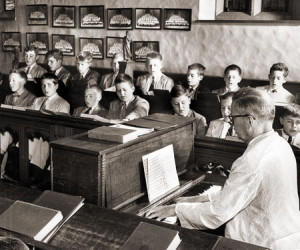 Mr. Lefebvre left Trinity Church in 1941 after 19 years and went to St. Paul’s School, Concord, N. H., where he remained until he went to the Philippines. He had planned to stay here for a few days before going to Digby, N. S., to live m retirement. He had had a summer home there for many years.
When Mr. Lefebvre was honored by Columbia University more than 30 years ago with a doctorate in music, Dr. Nicholas Murray Butler, then university president, said that he was “born to love of music and early seeking a musical career: successively choirboy, organist, and now choirmaster and organist at Trinity, that ancient foundation to which this university is bound by ties that go back to its very birth.”

Mr. Lefebvre, who was born in Richmond, became devoted to music early in life. He almost lost out when someone discovered that the family piano could be locked, but he was saved by Channing Moore Williams, Episcopal Bishop of Japan, who, on a visit to Richmond, insisted that his 8-year-old great-nephew be given access to the instrument. The bishop then committed himself to subsidizing the boy’s piano lessons.

Later, young Lefebvre was sent to St. Paul’s Choir School m Baltimore, where he started an intramural newspaper, appointed himself editor and wrote the whole publication. The venture led to his becoming choir librarian, a post that gave him access to the church organ.

Organist, he quickly decided, was to be his life’s vocation. He was sent to the Peabody Conservatory of Music in Baltimore, leaving it after two years to become organist at St. Stephen’s Church in Washington.

In 1916 Mr. Lefebvre became an assistant organist at the Cathedral of St. John the Divine. When asked to become “visiting director of a male chorus upstate,” he accepted. The appointment turned out to be that of director of community singing at Sing Sing Prison. It did not last too long, however, because Mr. Lefebvre enlisted in the Naval Reserve the following year and served through World War I on a trans-Atlantic troopship.

Mr. Lefebvre, who was tall and slender and had brown hair and blue eyes, was an inveterate pipe smoker. He used to conduct his chorus rehearsals without outbursts of temperament. “I haven’t time for artistic explosions,” he said. The worst reproofs he was known to have uttered were, “Now let’s sing it in English,” and “I could get a group of 5-year-old girls to learn that quicker.”

His rehearsals invariably began on the appointed minute and ended the same way, even if the singers were half-way through a note. He said that singers who were dismissed promptly could be counted on to arrive on schedule.

Before taking the Trinity appointment, Mr. Lefebvre was organist and choirmaster at St.. Luke’s Church in Montclair, N. J. In Wall Street Mr. Lefebvre became choral director of the Down Town Glee Club, a large group of male singers. It gave its first public i concert in 1927 at the Roosevelt Hotel, with Florence Easton of the Metropolitan Opera as soloist. Its success led to an invitation to Mr. Lefebvre to become director of the University Glee Club.

He became in turn conductor of the Musical Art Society of Orange, N. J, and of the Golden Hill Chorus, a group of women singers who worked in the financial district.

All of the groups gave many concerts at Carnegie and Town Halls.

The late Noel Straus, a former music critic for The New York Times, said the singing of the Down Town Glee Club under Mr. Lefebvre’s direction in 1937 could be “wholeheartedly endorsed for its vigor, alertness, and. spontaneity.” He cited its “praiseworthy balance and blending tone, cleanness of attacks and releases, and careful attention to dynamic and color effects.”

A memorial service will be held at Trinity Church Tuesday at 10:30 A.M.