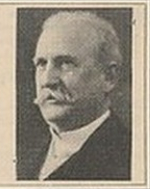 TO FEW MEN is it given to be associated with an organization as long as Arthur D. Woodruff has been connected with the University Glee Club of New York City. During all of its corporate existence–a period of thirty years–he has been its conductor; and for thirteen years previous to its organization, he was the conductor of clubs out of which the University Club grew. A celebration of the Thirtieth Anniversary of the Club is unthinkable without giving a prominent place to the man who has made it what it is.

Early in the seventeenth century two brothers, who spelled their name “Woodroffe,” came from England to America. One settled in Connecticut and the other in New Jersey. The former was the first American ancestor of Arthur Woodruff, who was born 22 August 1853 at “Brookside,” Washington, Connecticut. The house is still standing and is now the summer home of our Associate Member, Victor H. McCutcheon. Tru’ man Hine Woodruff and Ellen Smith Woodruff were Arthur’s parents, and it is to their love for and knowledge of music that Arthur attributes much of his success in his life work. The middle initial “D” in Arthur’s name does not stand for any, thing; he put it in, when a youngster, because he liked it.

From a very early age until he was eleven years old, Arthur attended the “little old white district school house” at Washington; then for five years he was a pupil at the Gunnery School; after which he went to the Eastman National Business College at Poughkeepsie from which he graduated in 1870, aged seventeen.

At this time he had no thought of making music anything but an avocation, and, like so many boys, entered upon a business career. His first employment was with Edward Malley and Company, wholesale dry goods merchants of New Haven, as a stock clerk and a little later as a salesman. On Washington’s birthday 1872, A. D. came to New York City and for the next three months was a sales clerk at Lord and Taylor’s. A better opportunity offering with Bergen and Company, manufacturing milliners, he entered their employ in May and remained until February 1876, having served in a dozen capacities from packer and shipping clerk to general superintendent. He was induced to leave Bergen and enter the Tea Department of Archer and Bull, an old East India importing house, as salesman and office assistant, by Gilbert G. Chapin, with whom Arthur had sung in a quartet; but he soon found that it “was more fun to sing in a quartet with him than to work under him in the tea department.” Nor did Arthur’s troubles stop there for eight months later he was notified that on 1 January ’77 the importation of tea would cease, there being no money in it for the firm.

Confronted with the prospect of no position, as luck would have it, he was invited to join the “English Glee Club Concert Company of Soloists.” A. D. asked Mr. Bull for permission occasionally to leave the office early to keep rehearsal and concert engagements, which was readily granted for the balance of his time with the firm. For three or four months thereafter he unsuccessfully sought another business position, and then—he decided to make music his life work.

Woodruff’s father sang tenor and his mother soprano in the choir of the old Congregational Church on the Green at Washington. It was at his mother’s knee that A. D. learned to read music without the aid of any instrument whatsoever. When about fourteen years old, he attended the country singing school conducted by Earl Buckingham, who had similar schools in four or five of the neighboring towns. Buckingham was an old-fashioned teacher, who both knew and taught the rudiments of music. He made his pupils rely upon themselves without help from an instrument; he laid a foundation of thorough musical knowledge upon which Woodruff was able later to erect a larger musical structure.

In 1876, having determined upon a musical career, A. D. seriously took up the study of music, especially the voice, under George James Webb, an Englishman, who came to Boston and was a contemporary of Lowell Mason, the great hymnwriter, and had recently moved to New York. Some time previous to this, Arthur had had a few desultory piano lessons. His next instructor was Rheinhold L. Herman in interpretation, oratorio and German lieder. At the same time he studied harmony and counterpoint with Samuel P. Warren and John Henry Cornell, both profound musicians. In 1889, while in Europe, he studied the voice with William Shakespeare at London.

Returning from college in 1870, Woodruff joined the double male quartet at Washington, singing first bass for a while, “but not enjoying the part, shifted to the first tenor part”; meanwhile acting as rodman on the railroad then being put through from Danbury to Litchfield. This quartet, which took part in local entertainments, was led by Buckingham, the singing teacher.

In December 1872, he did his next singing, this time as a member of the choir of St. Thomas’s Church, New York, as a chorus tenor under George William Warren. At this time he helped organize the Hatton Glee Club – a double quartet – which existed for three or four years and took part sporadically in amateur entertainments. 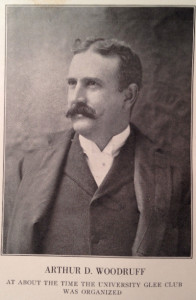 May 1874 found Woodruff as tenor soloist in the quartet at St. James’ Episcopal Church, then located in East 72 Street; and two years later he occupied a similar position at St. Andrew’s Episcopal Church. The next year he organized a chorus at St. Andrew’s which he conducted for the following three years. This was A. D.’s first position as conductor. It was at St. Andrew’s that he met Euretta Cromwell Dayton, the daughter of the senior warden, who later became his wife.

Woodruff became the tenor soloist in the quartet at the Church of the Incarnation, of which Arthur Brooks, the brother of Phillips Brooks, was rector, in May 1880. Next year he was given charge of the music and organized a chorus choir, which later became a choir of sixteen professional singers. Here he remained for sixteen years, during the last six of which there was a quartet supplemented by a mixed chorus of twenty-eight voices involving a total yearly expense of $15,000, of which Woodruff, as soloist and conductor, received $2,500. In 1895 the rector died; in 1896 the chief financial backer of the choir died; the entire choir was dismissed; and a boy choir was installed to please the new rector. This closed his church work, –he never sought another position.

During all this period Arthur was exceedingly busy in another field of music – teaching. In 1879 he was requested by a lady to teach singing to her daughter. From that time forward he received more and more pupils until at one time he gave as many as seventy-five lessons a week.

In the autumn of 1876 he joined the Mendelssohn Glee Club and was to have been soloist at the first concert, but had such a bad cold that he could not sing. “Expected to be thrown out neck and crop at failure to perform.” Woodruff sang at least 75 per cent of the tenor solos of the Mendelssohn for the next twenty years, and was everywhere known as the tenor soloist of the Mendelssohn GIee Club, constantly receiving an increasing number of invitations to sing in many places. Twice in one season he sang in the Messiah and the Creation (’82-’83) given by the New York Oratorio Society, conducted by Dr. Leopold Damrosch, the father of Frank and Walter Damrosch. He sang the leading tenor part in many oratorios with organizations in Washington, D. C., Baltimore, Philadelphia, Providence, Worcester, Boston, etc. At the height of his career, in 1897, Woodruff decided to give up singing and thereafter to devote his whole attention to conducting and teaching, having during the last five years, occupied the position of leading concert singer of his day, a position now held by Werrenrath and Murphy.

The beginning of Woodruff’s career as a conductor of singing societies was in December 1880 when he was invited to conduct a mixed chorus in Englewood. Having had three years’ experience in conducting a choir, he felt, to use his own words, “I could turn the trick, which I immediately proceeded to do.” It was in the next year, 1881, that he took charge of the undergraduate glee club at Columbia, in which John Tempest Walker was the most influential man. Thus began his connection with that group of men, who, upon graduating from college formed the Columbia Alumni Glee CLub, out of which directly sprang the University Glee Club. This association of forty-three years has been possible only because of the qualities possessed by Woodruff – his spirit of youth, his ability to understand and his love for young men, his integrity, his musical attainments, his tact, his manliness, his unparalleled devotion to the common interest.

Many have been the clubs he has conducted. A list is given here of the more important; of all but six he was the organizer and first conductor – an astonishing record.