The UGC’s weekly rehearsals are held on Thursday evenings. Philip M. Brett, an 1892 graduate of Rutgers and founding member of the UGC, described the club’s early days of rehearsals as follows:

The custom of that time was to have a keg of beer in the room adjoining the rehearsal hall. First the tenors were rehearsed while the basses drank beer. Then, the process was reversed; the basses tried to sing while the tenors wet their whistles. After this was over, Arthur Woodruff put all the parts together and attempted to finish the rehearsal. You may imagine the results! At the end of each rehearsal, the policeman on the beat came in, had his two glasses of beer, and said “Good night, God bless you, gentlemen!” and left us to make as much noise as we pleased.

While rehearsals have changed a bit since the UGC’s early days, the spirit of conviviality remains.

Since its inception, the UGC has offered two formal concerts a season in the winter and spring. Our concerts have often featured invited guest performers and other college and university glee clubs or singing groups.

Many of the early concerts were held at the Madison Square Garden Concert Hall, but thereafter the UGC shifted its performances to the ballroom of the old Waldorf-Astoria Hotel. The UGC has also performed on a number of occasions at Carnegie Hall and St. Thomas Church and in recent years at Lincoln Center’s Alice Tully and Avery Fisher Halls.

In addition to its formal concerts, the UGC has performed benefit concerts and fundraisers for many charitable, religious, and educational institutions.

It was never enough to simply rehearse and perform – from the beginning the UGC members sought each other’s company and the company of amusing and/or musically gifted friends in additional settings. The early UGC “smokers” preceded the afterglow tradition. The first recorded in club archives was held on May 3, 1902, when Gentleman Jim Corbett, the ex-heavyweight boxing champion, accepted an invitation to referee a match between two UGC members as the club looked on. Gentleman Jim was unaware that the two contenders had slit their gloves before the fight and stuffed them with cranberries. He was appalled by the apparent carnage as the first blows were landed and the juice spurted all over the boxers.

Smokers were generally held twice a year, with informal singing, free flowing beer, and outside entertainers. Then, when the UGC began rehearsing at the National Republican Club in 1923, it became customary for members to gather after rehearsals for song and drink at the Club’s grill. By 1955, this custom had caught on to the point that a Director of Club Activities was appointed to assure an interesting blend of in-house events and invited singing groups, soloists, and musicians following the rehearsals. The afterglow had become an official tradition, and would become the occasion for many sub-traditions: Family Night, Joke Night, Freshman Show Night, Opera Night, St. Patrick’s Day Night, and two fierce competitions. 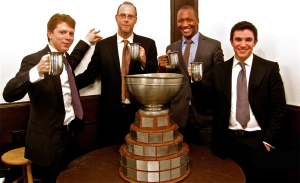 In 1923, a quartet comprised of UGC members called The Hambones became the first such group to sing over the radio, and subsequently achieved such success that the club paper, the Squeak & Squawk, threw down the gauntlet in 1930. “Are the Hambones so good that no one dares to challenge them?” The Hambones responded by donating the highly coveted and hotly contested Hambone Cup, to be awarded annually to the best quartet after a rigorous competition. In recent years, the winning four have also had the honor of performing at the spring concert.

Held in the Indian summer month of September since 1964, Summerfest is the first official event of the new season.  Active members and their significant others gather for food, drink and music to exchange summer stories and reconnect with old friends. Past locations include Larchmont Yacht Club, Siwanoy Country Club and Wykagyl Country Club.

A black-tie stag dinner of story and song is held each January following the UGC’s annual winter concert, and its name honors departed member Joe Tinney. At the conclusion of festivities, other departed brothers-in-song are also mentioned and remembered. Remembrance, however, is not limited to Joe’s Night. One of the most enduring and appreciated traditions of the UGC is the appearance of a group of members to sing a song or two at the funerals of fallen fellow members, and to mourn the loss of the music and fellowship they provided.