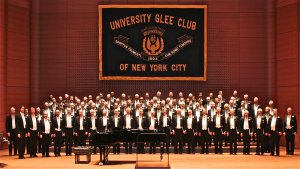 Founded in 1894, the University Glee Club of New York City is an all-male singing group established to encourage male voice singing of the highest excellence. Its 120 active singing members span recent college graduates and men who have sung with the UGC for over fifty years. Celebrating its 125th anniversary in 2019, its roster over the years has included thousands of men from hundreds of universities and colleges, all possessing the desire to sing, learned or fostered during their undergraduate years. The UGC performs two major concerts each season and its repertoire covers a wide range of music including classical, Broadway musicals, sea chanteys, spirituals and traditional college songs.

About Men; A Joyful Noise

By HOLCOMB B. NOBLE; Holcomb B. Noble was science and health editor of The Times magazines. Published: December 27, 1987 in the New York Times.

I ONCE LEANED BACK against the railing of the second-floor balcony of the Women’s National Republican Club, just off Fifth Avenue, and realized there were other men in this world every bit as insane as I. This was not immediate cause for alarm. To the contrary, what was happening was that a crucial problem that had plagued me since college was being resolved before my ears.

For years, my wife had pointed out that nowhere in the codes of human behavior was it written that I be the last to leave a party simply because people had started singing. This otherwise-splendid woman just doesn’t understand the phenomenon at work here. It’s not that she doesn’t like good singing. But she’s reasonable about it. It gets late. She has to get up early. She wishes to go home. Now, I had found the company of men who really understood.

These men of the University Glee Club of New York City had rented the hall from the women Republicans and met there for rehearsals every Thursday night. A few had been meeting every Thursday night for more than 50 years; one, old Lanc, who’s 86, once keeled over from a row of the bleachers onstage during a Christmas concert in Avery Fisher Hall at Lincoln Center. He thought he’d better hold off and not sing for the second half that year, but he was back with the baritones for the concert the next semester, as we say.

The sound of a male chorus, better still, singing in a male chorus, does rock the soul. Take ”Bandura,” the Ukrainian folk song. As if by transport of the harmonies working at you, you are suddenly so deeply in unrequited love with a Ukrainian woman with beautiful eyes that day brings you no joy, night no rest. And as the beautiful foghorn of a bass takes the last line of the song down to the depths of low C, you want to wail. Not only unrequited love rocks the soul. So does Johnny marching home. Or homesickness for the Shenandoah. Or the rousing wildness of the ”Columbia Drinking Song.” Or the glory of the coming of the Lord trampling out the vintage – with all the might of St. Thomas Church’s organ blasting away in the background.

The power of the male chorus brings with it not only magnificent sounds but also the burdens and joys of the centuries, sharing them among fellow singers who thus become bound as those who have gone through the wars together. Men seem to need this kind of vehicle, or crutch, or excuse, if you will, for friendship. Sports and cars are common commodities. The all-male chorus is a superb excuse.

But why all-male? Isn’t it the same in a mixed chorus? Well, try a Bartholomew sea chanty with an alto and soprano section, and all is lost. The mixed sound is nice, but it’s something else. Maybe the reason the University Glee Club of New York has grown so large, to 170 active male singers, from about 110 a decade ago, is that there is a yearning to keep the male sound. For the men, this kind of music is a major part of their lives; and the women in the audience always seem happy about it all. There is an unspoken fear, though, among club members that one day somebody will say, ”Hey, its unconstitutional that you should meet in this quasi-public place, indeed, one owned by women, and yet bar women from membership,” that some future Janet Baker or Bette Midler will sue. The outcome will depend on whether the Supreme Court will agree to hear 170 voices.

Life with these singing madmen is not all ponderous or Shenandoah gloom. The sight of a former candidate for Governor of New Jersey, Rich McGlynn, dressed in drag and singing ”Whatever Lola wants, Lola gets,” in an all-male rendition of ”Damn Yankees,” was enough to drive even the hardiest 21-year-old members into life-threatening paroxysms. (That performance alone probably set the cause of women back 100 years.) The conductors have always had a touch of humor. They’ve had to. It’s not easy to tell some cocky middle-aged Wall Street lawyer standing among recent college graduates that he sounds dreadful by comparison. (Actually, some of the basses get better as they get older.) Sarcasm helps. The renowned conductor Channing Lefebvre, who led the chorus from 1927 to ’61, used to smile benignly when trouble appeared, and say: ”Those black spots on your sheet of music are but an idea. I’ll let you know my idea. Maybe you have a better one.” And John Baldwin, the magnificent concert organist and conductor for the last 26 years, will march around the podium, grab himself by the seat of the pants, moan, warble and shout: ”O-O-O-O-oh, am I hearing a bunch of tired old men – or singers?”

Still, it’s not so much the humor that lingers. There was that night a few years ago when we invited the snappy young West Pointers to sing with us in Avery Fisher. ”And the rockets’ red glare, the bombs bursting in air,/ Gave proof through the night that our flag was still there. . . . ” Even for a hardbitten old newspaper editor, it was tough to get through that one. And my 90-year-old father was in the audience. Tears were streaming down his face when the song and concert were over. ”That was one of the nicest moments of my life,” he said.